Several studies have shown that regular consumption of chili peppers can have health benefits. Here are some of the main areas of discussion that have emerged over the past few years regarding the benefits of chili peppers. 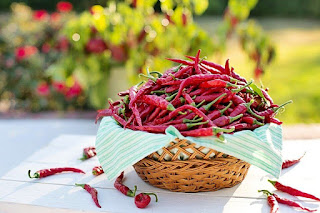 A Canadian study has shown that regular consumption of chili peppers can help your body control insulin levels after eating, which may benefit people with diabetes or who are overweight. The study also showed that the candidates followed a diet high in chili peppers had lowerblood glucose levels than those who followed a diet without spices. This is because chili peppers may cause decreased insulin, C peptide secretion and increased hepatic insulin clearance.

The substance that gives chili peppers their heat is called capsaicin, and it is known to contain a neuropeptide associated with the inflammatory process. In patients with autoinflammatory diseases such as rheumatoid and arthritis, plasma proteins bound to chili have been reported.

Chili peppers can help with congestion problems. If you eat a dish loaded with hot peppers, the heat from the capsaicin causes secretions, and even sweating and a runny nose, which helps clear the nasal passage.

Yet there are several opinions which seem to be divided as to whether chilies help prevent or cause cancer. In recent years, a study has proven that consuming capsaicin or chili peppers can protect against stomach cancer. For example, rates of gastric cancer in Mexico, where the consumption of peppers is particularly high, are relatively low. They also noted the correlation between increased consumption of chili peppers in other countries and lower rates of gastric cancer.

Chili peppers has a reputation for relieving dyspepsia, stimulating digestion and gas, as it stimulates the circulation of blood in the stomach and intestines; it causes the secretion of digestive juices.