Thanks to its colors and moderately pungent flavor, peppers are labeled as a vegetables rather than a spices. Peppers have a thick, brittle skin with a shiny covering. Besides the flavor that they add to dishes, peppers have several health benefits. Red and green bell peppers contain carotene and carotenoids, which can be converted into vitamin A, which is very effective in improving people’s vision and preventing night blindness. 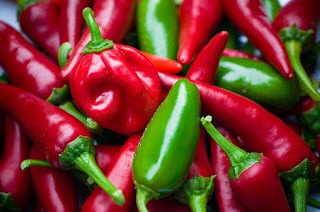 In addition to containing disease-preventing compounds and full of vitamins, peppers add flavor to your dishes. In general, red peppers have a pungent flavor, which can eliminate the fishy or chicken smell in dishes. Besides the high content of carotene, red pepper has high nutritional value, which has the effect of protecting against diseases and infections. One red pepper contains vitamin A, which can meet the daily demand of an ordinary adult. In addition, long-term consumption of red pepper also has an anti-aging effect, it contains almost 110 mg of vitamin C. Pepper is rich in antioxidants which can neutralize harmful free radicals in the body and which are beneficial for the health.

Like red pepper, green pepper also contains a large number of vitamin C, as well as a variety of trace elements and vitamin K, which has a side therapeutic effect on bleeding gums, anemia and other diseases. Hot green chili also contains capsaicin which also has the effect of lowering blood fat.

In general, pepper has high nutritional and medical value, however, it is hot in nature, so it is inappropriate to eat 100 grams of fresh pepper each time is sufficient. If you eat too much pepper with a strong spicy flavor it will easily lead to hemorrhoids and other inflammation.