The health benefits of blueberries are numerous. Research continually proves that blueberries contain powerful antioxidants that ward off a variety of diseases. In addition, this fruit is packed with other vitamins and minerals necessary for a healthy body.
Blueberries are a perennial plant that typically blooms in mid-summer. There are 2 main varieties of bushes. The first variety is wild and grows quite low to the ground and is called the lowbush blueberry; and the second variety is the tallest is a cultivated plant called the highbush blueberry.
Blueberries are spherical in shape and measure about half an inch in diameter. When ripe, the berry is a blue-purple color and its flavor becomes less acidic and much sweeter as the berry remains in the bush. The taste varies according to its maturity. 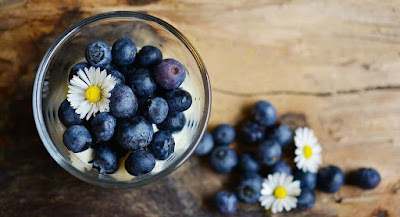 The Best Health Benefits of Blueberries

In recent years, several recent studies have shown that blueberries have even more health benefits than originally thought. This is because wild blueberry varieties contain even more certain nutrients than cultivated varieties. These studies have shown that the numerous antioxidants present in the skin and flesh of blueberries slow down the degenerative process of Alzheimer’s and fight the effects of the disease. In fact, other studies have even shown that consuming this berry can lessen the negative effects of a stroke. The study showed that people who consumed blueberry juice had better memory and less problems with depression. Numerous studies have also shown its benefits for the heart and cardiovascular health. The anthocyanins in blueberries, which gives the fruit its dark blue color, relaxes and widens the blood vessels, leading to lower blood pressure. It can even lower bad cholesterol levels. Finally, a research study has shown that blueberries decrease abdominal fat and decrease the incidence of metabolic syndrome.
Blueberries have many health benefits that have been known to scientists for ten years. Blueberries have more antioxidant properties than many fruit. Antioxidants have been shown to decrease the movement of free radicals throughout the body which in turn decreases the risk of heart attack, cancer and even decreases the effects of aging in the body’s organs, especially the skin. Blueberries are similar to cranberries, promote urinary tract health by cleansing the tract of unhealthy bacteria and thus preventing urinary tract infections. The high levels of blueberry anthocyanins aid vision by decreasing the incidence of vision loss due to pathological processes such as macular degeneration and cataracts. This fruit is rich in dietary fiber which decreases the incidence of constipation while minerals and vitamins like copper improve digestion.